Oops! It appears that you have disabled your Javascript. In order for you to see this page as it is meant to appear, we ask that you please re-enable your Javascript!
HomeSmartfanThe SmartFan Wood Stove Fan Review

Do I Need A Wood Stove Fan?

Wood stoves are great. They’ve got a delightful, rustic feel about them and are a popular way of heating many homes across the country. The one problem they have though, is that while the area immediately around the wood stove gets nice and toasty (and perhaps even a bit too hot!), the rest of the house doesn’t get a lot of benefit. That’s where the Smartfan wood stove fan comes in! Developed over a period of two years, the goals behind the Smartfan were simple. Its creators wanted to make a fan that would radically improve the efficiency and overall effectiveness of the classic wood stove that so many of us love and use for home heating.

In order to achieve that goal, the fan had to do three things, and do them really well. It had to be easy to set up and install, it had to be automated, and it had to use very little electricity. This last element was especially important because of course, one of the major reasons that people invest in wood stoves for heating is so they can reduce their electric bills. It wouldn’t make much sense then, to run a fan that used electricity, just so you could improve the efficiency of the stove – that would see the fan essentially working against itself!

Fortunately for you and for the company that make it, the Smartfan wood stove fan delivers on all three. We’ll explain exactly how, just below.

The packaging is really high quality, since SmartFan comes in a solid carton box, equipped with a thick layer of foam, from all sides, which is another thing that guarantees the product you decide to purchase will remain intact. Needles to say, there is little to no movement allowed inside the box itself, which is a nice additional guarantee for all of our customers.

Is It Easy To Install the SmartFan Stove Fan?

First, the Smartfan is easy to install. It can be accomplished in just a few minutes’ time, and with only very basic tools. The unit comes assembled, so it’s really just a matter of mounting it where you want it to go. As mentioned, that’s a big win for consumers, who don’t want to get bogged down in something that’s needlessly complex.

Does the SmartFan Need Any Maintenance?

The second and third points are so interrelated that it’s probably best to discuss them together. The Smartfan wood stove fan is about as automated as it can possibly get, because the heat from the stove is the mechanism that controls when it powers on, and at what speed. Sensors in the fan detect temperature. At a certain temperature, the fan will begin operation on its own. In general terms, the hotter the stove, the faster the fan blades turn. It’s not quite that simple, but we’ll get to that in a moment, just below. The important thing to note here, however, is that there’s nothing to manually turn on or off. The fan’s operation is controlled by the heat produced by the stove. 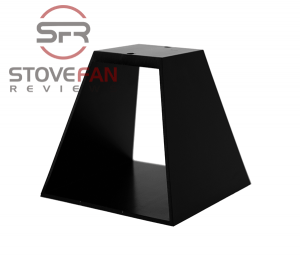 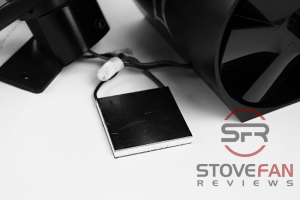 The SmartFan is built of light and anodized black aluminium – this is what guarantees longevity and top notch quality of the product itself. The bottom part of the SmartFan is meant to touch the hot stove appropriately and cover a large surface, which, in return, assures safe transmission of the hit to TEG (thermo electric generator) module that sits pressed between the lower heat sink and, of course, the upper cooling chamber.

How Is This Wood Stove Fan Powered?

This is also what provides power to the fan. The same heat that warms your home is also converted into electricity to power the fan. That means you’re not drawing power from the grid or a battery pack. This is the key feature that makes the fan so efficient, and really what improves the overall efficiency of your wood stove. It improves efficiency by circulating all that gloriously warm air into the rest of the room. The problem of it being too hot right next to the stove, and too cold in the rest of the house is solved neatly and efficiently by virtue of the presence of the fan. 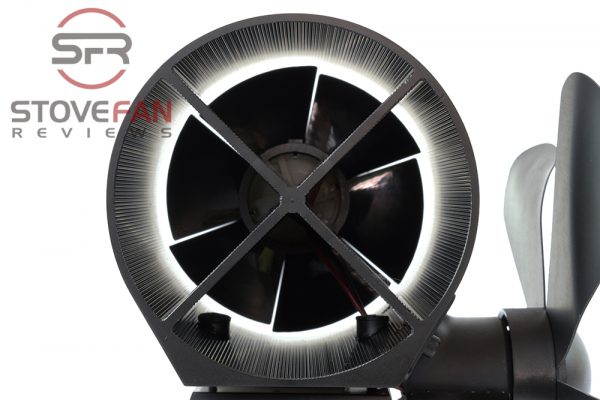 What increases the cooling process and makes it even more efficient is the fact that the upper part is rigged and the cooling chamber is additionally fitted with a quality miniature plastic fan that is capable of pushing even up to 20 cubic meters of air per minute at nearly 30 rounds per second. This is exactly what creates the ideal temperature difference for the TEG module to power two powerful and efficient 9 V DC motors. 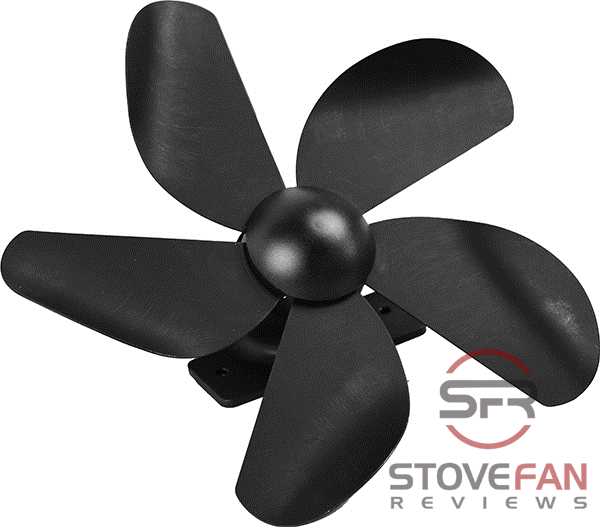 On the other hand, it's important to note that the main front fan is made of high quality aluminium and it can produce up to 21.5 KPM. Which essentially means that, overall, SmartFan creates a staggering amount of circulation of up to 360 cubic meters of hot air around your room per one single hour.

The stove gets hot, reaching the temperature threshold that powers the fan on. The fan blades begin to turn, pushing the warm air out through the room, providing you with a more even heating solution. The best part though, is that the Smartfan goes beyond even this. There are actually two fans working in tandem. The primary fan is the one that moves the warm air outward into the room, as described above. The secondary fan, however, is responsible for cooling the top section.

By keeping the top section cool, it creates a wider temperature differential, and this is the mechanism that provides maximum thermos-electric output. It also goes quite some distance toward keeping the unit from overheating, which could cause it to burn out. The secondary fan thus performs two functions at the same time. It increases the overall efficiency of the unit, and it prolongs its useful life. As far as engineering goes, you just can’t get a better solution than that! 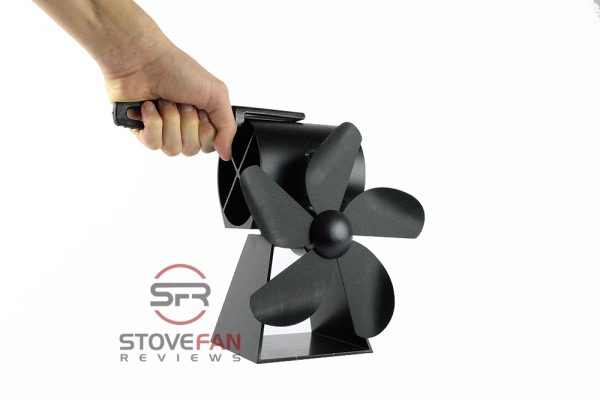 You're probably wondering by now, what to do if you need to lift the fan away from the hot stove, for any reason? Well, since this is a practical, easy to use product, there is a solution for that too. All that you need to do is use the plastic handle provided, this will ensure that you avoid touching any of the two working fans.

This comes with the tradeoff that the LT stove fans are simply not capable of operating in high temperature environments. They will burn out, despite the presence of the auxiliary fan. Thus, it is important to understand which of the two varieties is best for you, by understanding just how hot your stove tends to get.

Whichever one you choose, however, the Smartfan wood stove fan is a marvel of engineering excellence that will serve you well, making your wood stove vastly more efficient and effective at heating your home.