Oops! It appears that you have disabled your Javascript. In order for you to see this page as it is meant to appear, we ask that you please re-enable your Javascript!
HomeSmartfanSmartFan Mini – Stove Fan – Small But Powerful

Wood stoves are essential when it gets chilly, but they do have limitations. While the immediate area around the wood stove gets warm, the rest of the room remains cold, but you don’t have to put up with that anymore thanks to the SmartFan Mini. While it is smaller than other fans, it doesn’t give away much in terms of performance. 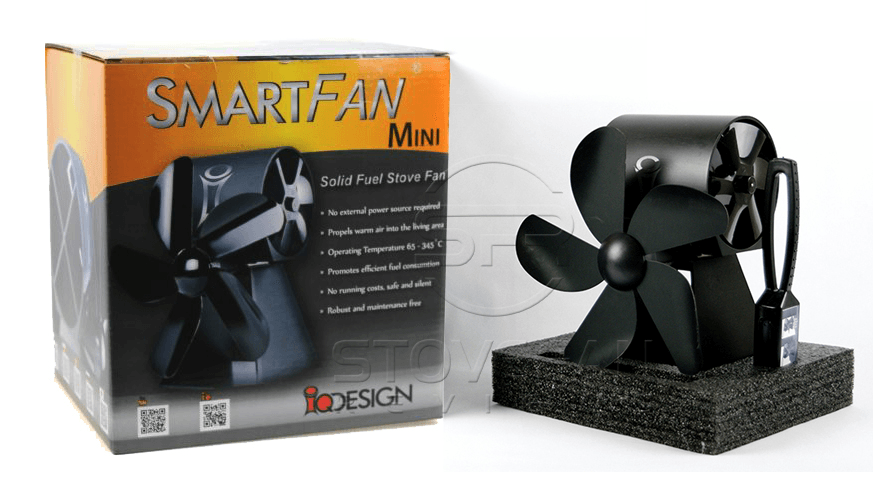 The fan is securely packaged with tough foam which has been shaped specifically for the fan’s handle, front blades and of course the fan itself. This is a much safer solution compared to the cardboard packaging of other models. It can also be countlessly reused without any misshaping or damage. An underestimated feature that might turn out to be useful if the item needs to be returned to the manufacturer to be replaced or repaired.

What are the SmartFan Mini Design and Features?

While this is a smaller version of the regular SmartFan, it still comes with a lot of outstanding features such as the following:

The fan works on the same principles as its larger counterparts: the colder  the top and the hotter the bottom, the more electricity is produced. By having the fan set over the upper section and using a specially designed front blade, the fan can move air at 200 cubic feet per minute. IQ Design have come up with a smaller version of their very successful original SmartFan in response to growing customer demand. It’s common that a stove is built into a fireplace recess with a limited opening over a stove top surface. So, the new, smaller SmartFan Mini is 30mm shorter and 20mm thinner than the original fan. Because the SmartFan Mini’s front blades are 30mm shorter in diameter they spin faster than its bigger cousin so the loss of airflow overall is not significant and is well compensated by the price difference.

What are the Benefits of the SmartFan Mini Wood Stove Fan?

The biggest benefit of this small stove fan is the way it enhances the heat circulation emanating from your wood or fuel stove. Even though it is more compact than the other ones available online, the Mini is able to produce the desired effects because it uses the same mechanism.

So, the question you’re probably asking now is why choose the Mini? Well for one thing the Mini offers the same performance in terms of CFM and the minimum and maximum operating temperatures as bigger models. Another advantage of the Mini is it doesn’t take as much space as other fans and weighs less. If space is an issue in your home, the Mini could be what you are looking for.

If you have never used a stove fan like the Mini before, you will feel the difference quickly when it comes to comfort. With a regular stove it is going to take a long time before the heat from your stove can be felt around your living area. In fact in most cases you will only feel the heat if you are near the stove.

The situation is different when you use the Mini because it distributes heat evenly. Just as important, you only have to wait a few minutes before the Mini begins adjusting the airflow around your stove.

The Mini is as powerful as it is easy to use. There are instructions that come with the package, but all you really need to do is start up your stove and position the Mini so the blades don’t hit anything. As the heat from your stove goes up, the fan goes to work and starts distributing the heat around the room.

How is the Performance?

This wood stove fan runs smoothly and quietly, with no need for an extra power source as it is self-powered. A major reason for the Mini’s superior performance is its use of a thermoelectric generation module (TEM). The TEM utilizes the stove’s hot surface to produce the electric current required to run the blades.

As this takes place, it prevents the heat in the stove from rising to the ceiling, and instead the air is directed into your living area, increasing your comfort level while making sure fuel is used more effectively.

Sometimes it might seem difficult to believe how such a small fan can have such a significant effect on your stove, but you just need to use it to verify that it does work. The inclusion of a pair of tongs to help you use the fan is most welcome in case you need to reposition while using it. A lot has been said about how quiet the fan is and that is true. Even when it is running you won’t be distracted by any loud humming, and this only proves a fan doesn’t have to be loud to be effective.

A small wood burnings stove fan has traditionally been dismissed or regarded as an afterthought because they don’t provide enough power. However that is not applicable to the Mini. In spite of the name carries a lot of power and enhances airflow. Now you don’t have to spend a lot of money to buy a fan to improve your stove’s air circulation, as the Mini proves big things do come in small packages.